Since coming to Germany and HPC Hamburg Port Consulting in 2020 as an IT Strategy Consultant, Amaresh Sahu finds himself frequently drawn to a former telephone booth in Hamburg. Professionally, the native of India is concerned with feasibility studies for state-of-the-art port community systems or terminal operating systems. What is it about an abandoned telephone booth that fascinates a person to this extent? “I like to read, now also in German,” he explains, displaying a Harry Potter book. He finds his reading material in a telephone booth that has been repurposed for free book exchanges and is taking an online German class, so nothing escapes him while he’s reading.

Amaresh Sahu says he has always been “interested in languages”. He grew up speaking his native language, Odia, in the eastern Indian state of Odisha, in addition to the common languages English and Hindi. He also learned Bengali during his bachelor studies at the Marine Engineering and Research Institute in Kolkata before taking to sea as an engineering officer. “Commercial shipping is just plain fun,” is how he sums up his six years in the profession – though, at some point, he sought “an intellectual challenge”. At shipping company MSC, he supervised demanding projects, which included testing new software programmes and putting them into operation for fleets. Before signing on to HPC, he completed his Master of Business Administration at the Rotterdam School of Management in the Netherlands.

At HPC, the straightforward go-getter was surprised to see “how quickly we can find a solution in a completely unfamiliar environment”. To this day, he feels this way every time he and the team successfully complete a project in three to six months. Included in these projects are workshops with operations experts from various international terminals. For example, Amaresh Sahu draws up cost-benefit analyses, which he uses to derive schedules for the implementation of port community systems.

When he’s at home, he takes a book in hand as often as he can. Ever since his wife was given a Dr. Oetker baking book as a gift, the Indian couple has been enthusiastically trying out cheesecakes. Amaresh Sahu likes the HPC tradition of bringing self-baked treats to the office on one’s birthday. He hopes to soon impress his Hamburg colleagues with his baking skills. 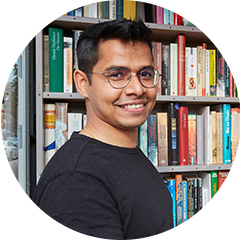 See what projects Amaresh has worked on:

IT Project Management of an E-Learning Platform

Process and Requirements Specification for a TOS