Dorothe Goertz, Senior Consultant for rail operations and hydrogen in the field of port handling

What does an expert in rail transport think of the German 9-Euro ticket, the temporary nationwide offer for local and regional buses and trains that was implemented in the summer of 2022? “You have to elaborate a long-term vision in advance if it’s supposed to have a sustainable impact,” Dorothe Goertz thinks. She herself always enjoyed travelling by train, whether it was between her two homes in Bielefeld and Münster or during her studies at TU Dortmund University. Though she became familiar with all modes of transport during her studies of logistics, she also realised: “Rail transport is what I enjoy most – because it has the greatest need for optimisation.” She has been working on this at HPC Hamburg Port Consulting since 2020.

“My current focus at HPC is on terminal planning,” she reports. She already concentrated on the automation potential of a hinterland terminal for intermodal transport in her master’s thesis. Now she works on an international level, planning the expansion of rail terminals in Central Europe and developing a concept for a completely new intermodal facility in California. “The USA has different types of containers, longer routes and double-decker carriages,” she enthuses. Dorothe Goertz is always inspired by new things.

Thus, it happened that she “fell into” a futuristic topic after only one month in the company: HPC’s parent company, Hamburger Hafen und Logistik AG (HHLA), wants to become climate-neutral by 2040, and the use of hydrogen as an energy source is to play a significant role. The graduate’s fresh ideas and scientific methods were in demand, and she acted as strategic advisor, contributing to the set-up of the HHLA Clean Port & Logistics innovation cluster for terminal equipment powered by fuel cells. Her tasks ranged from formalising the initial idea to project planning and subsidy management. As part of the TransHyDE flagship project, she analysed methods by which hydrogen can be economically transported. “Together with HHLA, we want to build up knowledge,” says Dorothe Goertz.

The native Westphalian also wants to continually learn on a personal level, preferably in the Spanish-speaking world – things like a volunteer year in Peru or a semester abroad in Spain. She found a Chilean partner to exchange language lessons with at HPC: “When I’m riding to the office with Barbara Allendes, I improve my Spanish and she improves her German.” 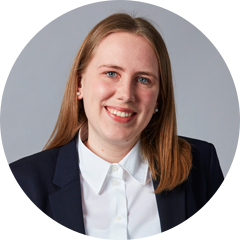 See what projects Dorothe has worked on:

Business Development for HHLA as a Hydrogen Hub Provider