The fan of large dimensions

When a huge ship loader appeared out of nowhere on the coastal desert in southern Peru, Sven Barckhahn's heartbeat accelerated. On his way to a new port construction project, the civil engineer with a doctorate, and port and railway specialist, was fascinated by the gigantic dimensions. "In this industry, people work with equipment of surprising and inspiring proportions", as he has been encountering over the past ten years while working at Hamburg Port Consulting (HPC).

A master railway plan project he worked on in Chicago, USA, was also very much to his taste: "In order to get an overview of the huge dimensions of the terminal, the client had us take off in a helicopter", he recalls as if it was yesterday. When developing new terminal layouts, Sven deals with many operational details that include scaling smaller parts to fit together so as to create the big picture. "It helps to be able to understand the size of the facility from different perspectives", he states.

The sporty Hamburg native likes to be on the move as much as possible himself, so he always has his running gear in his luggage. To gain as many impressions as possible on his business trips, he always trains outside–even in the sweltering heat of Qatar, you could see him on the pier leading to the fishing port, "…where I could admire a fleet of traditional fishing boats as I walked by". Sven’s dynamic personality is what drives him. That's why he finds it exciting to work on international projects with different experts in ever-changing team constellations, having to adjust each time. He describes his mental fitness programme like this: "Project diversity and immersion in the country and its people during the project time broadens my perspective".

Sven is also inspired by the bustling port of Hamburg. He gets a special kick out of the still pristine bulk cargo handling: "Superficially, all you see are grabs, ships and cargo but automation is vigorously advancing here too, like at Hansaport".

For Sven, a place that combines relaxation and fascination is the Strandperle on the Elbe and he describes it as "…the best spot where you can watch the giants of the ocean making their manoeuvres very closely". 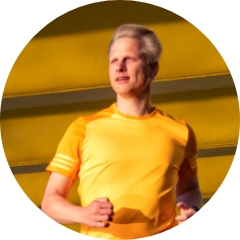 See what projects Sven has worked on: